55 Years On Jean Shrimpton’s Dress That Stopped A Nation 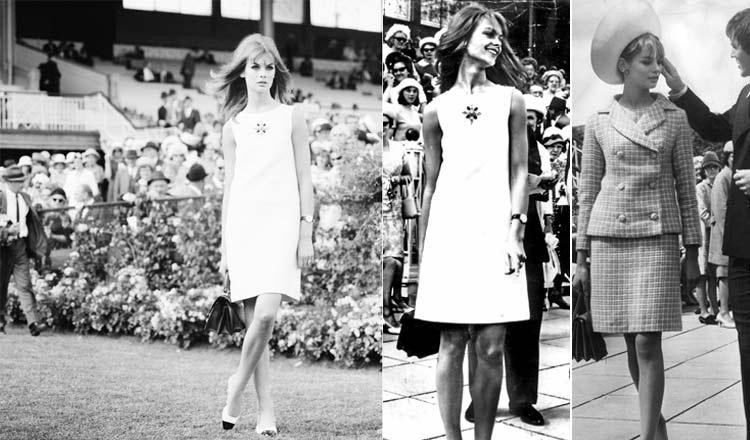 Wearing none of the assumed mandatory accessories of the Members’ enclosure – hat, gloves and stockings – the world’s first supermodel Jean Shrimpton sent shockwaves around the world.

Although tame by today’s anything-goes standards, this simple but elegant white mini-dress remains the most recognised non-racing image of the Melbourne Cup carnival, even 55 years later.

It had Fleet Street in such a lather that London editors scrambled photographers to Melbourne in a bid to capture more of Jean on the final two days of the carnival.

“Photographers were crowding around her and lying on the ground to get shots that would make her legs look even longer and the dress shorter,” recalls Jenan’s friend Maggi Eckardt, herself a former top model.

“I thought she looked fresh and fabulous. In my mind that dress is ageless, it could be worn today.”

On the arm of then boyfriend, actor Terence Stamp, London-based Jean was engaged by Du Pont de Nemours International to promote their new fabric Orlon during the four days of the world’s most famous racing carnival.

The Victoria Racing Club, eager to promote the fledgling Fashions on the Field competition, invited ‘The Shrimp’, a nickname she detested, to judge the event on Derby, Cup, Oaks and Final Day.

“The day of the races was a hot one, so I didn’t bother to wear any stockings,” Jean, now 78, said in her memoirs.

“My legs were still brown from the summer, and as the dress was short it was hardly formal.

“I had no gloves with me, for the very good reason that I owned neither. I went downstairs from my hotel room, all regardless of what was to come.”

Although openly jeered and snubbed by the ultra-conservative Melbourne establishment, Jean, then 22, remained defiant.

“I don’t see what was wrong with the way I looked. I wouldn’t have dressed differently for a race meeting anywhere in the world.

“I feel Melbourne isn’t ready for me yet. It seems years behind London.”

Today, however, the VRC couldn’t agree more with Jean’s choice of attire that put its Fashions on the Field competition on the world map.

Transform Your Face With Eyebrow Tattoos